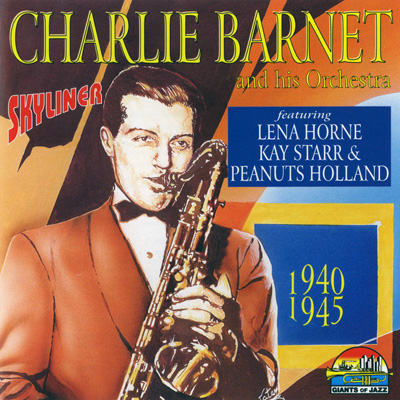 Skyliner was one of Charlie Barnet's most exciting hit records, and quickly became as closely identified with his big band as was Ray Noble's Cherokee. This 1996 EPM Musique Jazz Anthology compilation is one of at least six Barnet albums with the word "Skyliner" in the title. Tracks one through twelve were recorded for the Bluebird label between June 19, 1940 and April 30, 1942. Tracks thirteen through twenty follow Barnet's progress through the turbulent wartime years with a trail of Decca sides cut between July 1942 and February 1944. "Skyliner" comes from a V-Disc recorded on July 13, 1944; "E-Bob-O-Lee-Bob," like "Oh Miss Jaxon" a vocal feature for trumpeter Peanuts Holland, was harvested from a Jubilee broadcast on December 6, 1945. Some of this band's arrangements were written by Horace Henderson, Billy May and by the leader himself. Most Charlie Barnet albums are well worth investigating. This one lives somewhere near the top of the heap.
Review by arwulf arwulf
Top
Post Reply
1 post • Page 1 of 1