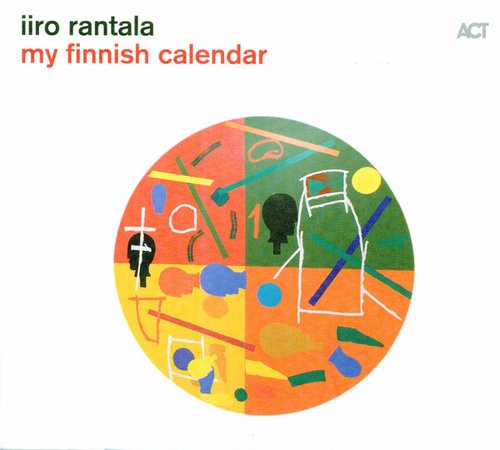 Iiro Rantala is a jazz chameleon who loves to appear in many guises. The Finnish pianist invariably springs a surprise with the concepts for his albums, particularly those of his solo piano projects. For "My Finnish Calendar", he has turned a new page: this is improvised music but with an extra-musical narrative: from a very personal and Finnish point of view, he has set to music the passing of a complete year in his home country, and he has done it with his typical mixture of melodic inventiveness, melancholy and humour. His well-known technical finesse and mastery, acquired over the years, have been applied here with an unerring instinct for bringing the essential to the fore.

Each piece on this album represents a month of the year, and each also exists as an independent artistic statement. And if the storyline might not always be directly apparent from the music, Rantala has provided explanations and hilarious anecdotes in his liner notes. The sheer strength with which all this inspiration has been bubbling up becomes clear right at the beginning of the year: "January" sets the sequence in motion with a mighty hymn in a minor key, true to Rantala's description of this "month of regret." As he explains, "Finns regret that they spent too much money on Christmas, ate too much and definitely drank too much on Christmas and New Year. Many Finns are cleaning their system and have an alcohol-free month of January. That doesn’t make them happier people." The exact opposite is then heard in February: a cheerful, lively whirl of staccato sweeps over the listener, as the Finns are now “at their best. All kinds of snow activities make them happy.” But by March it has been cold and dark for long enough. The Finns are bored of winter, so Rantala's "March" is a sparkling, slightly melancholic chanson: “the Finns are dreaming of a trip to Paris, where spring is already happening."

Rantala finds a fitting way to explain the significance of each month through music. From the “summer-planning month” of May, piano strings muffled, and becoming ever more dynamic, to the “Kesäkuu” (meaning summer month) of June (which is in reality “very cold and uber rainy”) and for which he finds a melody which sounds almost cabaret-inspired, to the travel month of July and then on to August which is the best weather-wise, but when everyone is obliged to go back to school or work – which Rantala captures in a strict, almost classical fugue. Into autumn, there is a stately build-up from the sentimental romanticism of September and a stormy October to the darkness of November, which Rantala interprets as a comforting ballad deftly aligned to the Finnish character. And finally on to December, which is full of work, until the Finns are totally exhausted. As Rantala explains playfully: "Everything that makes January the month of regret is built up to in December." With that, the whole sequence can start afresh – indeed, this Finnish calendar is such appealing music, one wants to hear right through again – and straight away.

"My Finnish Calendar" is Iiro Rantala's third solo album. He has remained true and consistent to the artistic beliefs that shaped both of his previous recordings: "Jazz needs melodies,” he says. “It needs things that people can latch on to." On his ACT debut "Lost Heroes" (2011) Rantala proved his outstanding ability to venerate great predecessors and role models, from Bill Evans, Erroll Garner and Art Tatum to Esbjörn Svensson, Michel Petrucciani and even Luciano Pavarotti. He didn’t copy them, what shone through was his own identity. Then, in 2015 he captivated his audience with his interpretation of John Lennon's music. In "My Working Class Hero", Rantala succeeded in creating an anthem to the great revolutionary of pop, in an incredibly subtle way and in a true jazz spirit. And he has now reinvented himself again, as a researcher observing the Finnish seasons through jazz...
Top
Post Reply
1 post • Page 1 of 1