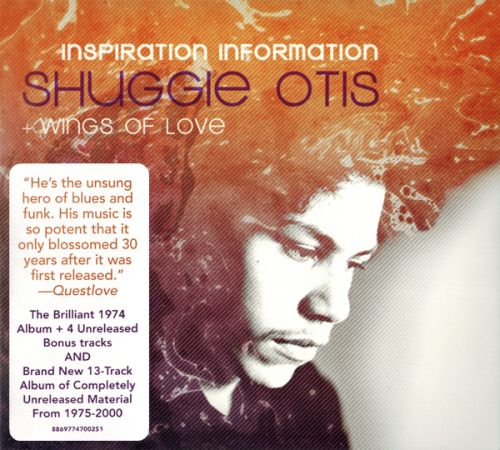 As Shuggie Otis never capitalized on his newfound success in the '90s, somehow incapable of cobbling together a new record in the wake of the 2001 Luaka Bop reissue of Inspiration Information, it may be easy for partisans to overrate the 2013 Legacy pairing of that 1974 album with Wings of Love, a new collection of material Otis recorded between 1975 and 2000. That quarter-century span should be a tip-off that this is not a lean, coherent, purposeful album, but rather a collection of every listenable thing Otis completed over the course of 25 years, and in that sense, it's pretty good. Part of its appeal is that it is so thoroughly out of phase with the present that some songs seem to date either much earlier or much later than their original recording (for instance, the title track "Wings of Love" feels heavily inspired by Todd Rundgren's 1975 classic "Real Man," but apparently wasn't tracked until 1990). All of Wings of Love has a slightly woozy, trippy feel, something characteristic of its one-man-band origin, where keyboards and compressed microphones create a hazy tapestry, and part of the appeal of this music is how it feels like the late '70s and early '80s without belonging to its time; it certainly doesn't feel modern, but it can't be pinned to any specific year, which is appropriate as Otis essentially dropped out of sight and made this music in a vacuum. That isolation is certainly part of the appeal of Wings of Love, particularly because Otis isn't entirely unaware of what constituted a hit in 1987, so he overloads "Give Me a Chance" with drum machines and synthesizers that belong to the spring of that year, and part of the fun is hearing the disconnect between Otis' aspirations and what made for a hit in 1987, or how "Give Me Chance" isn't that far removed from 1977's tinny, pulsating "Don't You Run Away." Both of these are good songs and there are other good moments here, some sounding quite different than expected (the overloaded Hendrixian guitar of "Fireball of Love"), but the fact that the 1977 and 1987 tracks do not have a great distance in either their production or sensibility doesn't speak to a unique vision, it illustrates how far into his own world Otis was. And while that's an interesting place to visit, Wings of Love doesn't speak to a misunderstood genius; it's the sound an eccentric who was able to run wild for years on end, never caring about whether his music would be heard. In theory, that's fascinating. In practice, it's generally a curiosity.
Top
Post Reply
1 post • Page 1 of 1