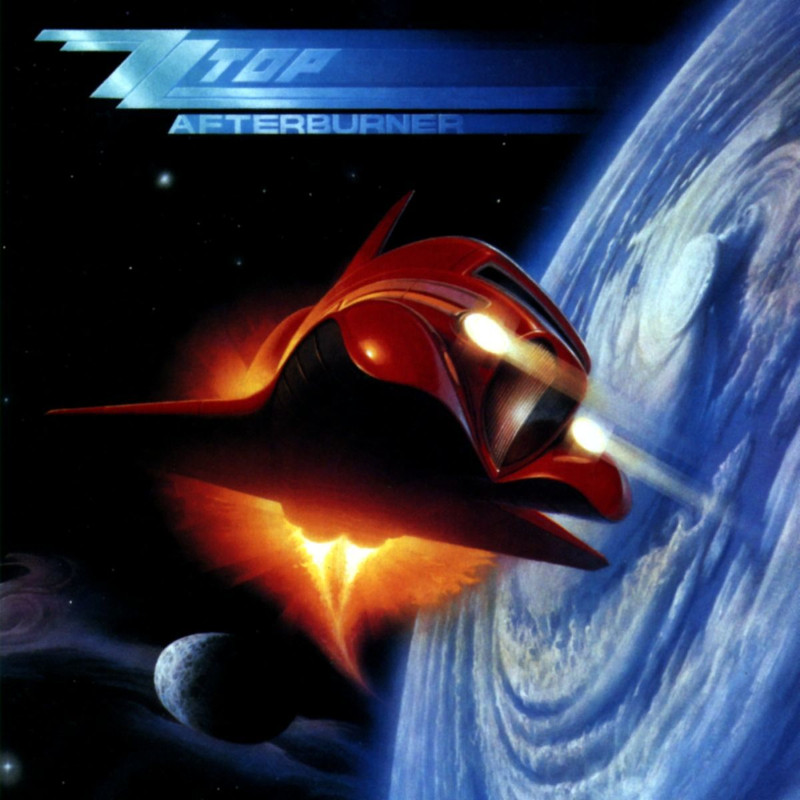 Well, if you just had your biggest hit ever, you'd probably try to replicate it, too. And if you were praised for being visionary because you played all your blues grooves to a slightly sequenced beat, you'd probably be tempted to not just continue in that direction, but to tighten the sequencer and graft on synthesizers, since it'll all signal how futuristic you are. While you're at it, you might visualize how space age this all is by turning your signature car into a space shuttle. If you look at things that way, then Afterburner, ZZ Top's follow-up to their blockbuster Eliminator, makes sense they're just giving the people more of what they want. Problem is, no matter how much you dress ZZ Top up, they're still ZZ Top. Sometimes they can trick you into thinking they're a little flashier than usual, but they're still a lil' ol' blues band from Texas, kicking out blues-rockers. And blues-rock just doesn't kick when it's synthesized, even if ZZ Top's grooves always bordered on robotic. So, Afterburner, their most synthetic album, will not please most ZZ Top fans, even if it did go platinum several time over and reached number four. That's all just a sign of the times, when even hard rock bands had to sound as slick as synth pop, complete with clanging DX-7s and cavernous drums. As an artifact of that time, Afterburner is pretty good never has a hard rock album sounded so artificial, nor has a nominal blues-rock album sounded so devoid of blues. Apart from the chugging "Sleeping Bag," not even the singles sound like ZZ Top (though "Dipping Low (In the Lap of Luxury" is a blatant "Gimme All Your Lovin'" rewrite): the terrific post-new wave rocker "Stages" is the poppiest thing they ever cut, the ballad "Rough Boy" is far removed from slow blues, and the full-fledged synth dance of "Velcro Fly" is a true mind-bender. All this means that Afterburner is merely a product of its time the only record ZZ Top could have made at the time, but it hardly exists out of that time.
Top
Post Reply
1 post • Page 1 of 1