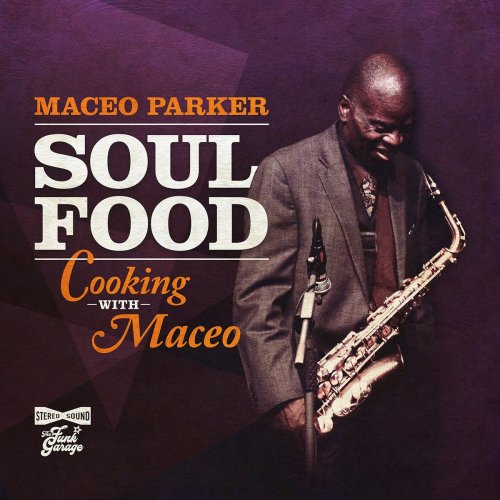 Soul Food - Cooking with Maceo’ blends raw, old school funk with the flavours of the New Orleans school of music. Parker worked with Ivan Neville, Nikki Glaspie and Tony Hall, as well as a host of local musicians to record the songs. The funky flavour of the city weaves its way through the album as the funk father and his band take on iconic songs of the Mississippi masters such as Dr. John’s voodoo funk of Right Place, Wrong Time, The Meters Just Kissed My Baby, Yes, We Can Can recorded by Allen Toussaint as well as takes on Aretha Franklin’s Rock Steady, Prince’s The Other Side of the Pillow and Maceo’s long-time hero and Ray Charles Saxophonist, David "Fathead" Newman’s Hard Times. We also get funky workouts from Parkers own back catalogue on ‘Maceo’ and ‘Cross The Tracks’. The latter adopted by Giles Peterson at the staple song of his iconic WAG Club in Soho, London in the 1980s.

The amazing P-funk Parker has been at it with his legendary sound for time that dates back to the 1960's. That's when Maceo and his drummer brother Melvin climbed on board the James Brown funky soul funk train. It wasn't long before James coined the solo summoning signature, "Maceo, I want you to Blow!". To most musicologists it's the musically fertile group of men from this period of James Brown's band who are recognized as the early pioneers of the modern funk and hip-hop whose sounds we still jump to in the present day.
Top
Post Reply
1 post • Page 1 of 1