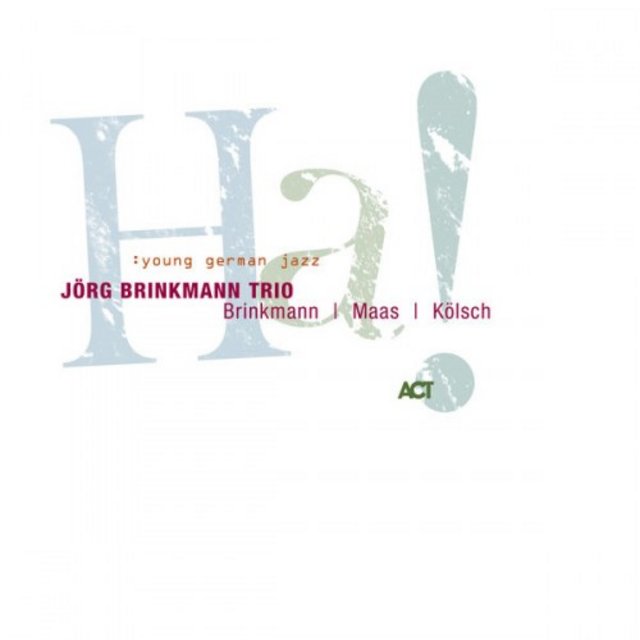 The days when German jazz musicians looked towards the USA like a fox in a henhouse are history. Stronger than ever, this new generation is pushing forward into wide-open regions. With its debut album Ha! (ACT 9662-2), the Jörg Brinkmann Trio demonstrates what fascinatingly open styles are possible when you take off the blinders.

32 year old Jörg Brinkmann would stand out simply because of the instrument he plays: the cello, which is a rarity in jazz. But Brinkmann’s playing is also outstanding. Educated at the prestigious Music College in Arnheim, Holland, he is happy to jump into the midst of the otherwise cello-free territory of jazz side by side with such prominent experimentalists as Herb Robertson, Frank Gratkowski, and Michael Vatcher. But he also has no problem playing with pop bands.

The four years younger pianist Oliver Maas is likewise a subversive. After first having been schooled in the classical tradition, he studied with jazz pianist Claus Krisch, attended workshops given by the likes of John Taylor, Uri Caine, and Gunter Hampel, and eventually studied jazz piano, graduating from the Folkwang College of Music in Essen, Germany. Even at his young age he is already teaching at the Saarbrucken College of Music; it makes sense when you consider his wide-ranging oeuvre, including such projects as Mop de Kop, and Invisible Change.

Brinkmann and Maas have known each other for years. They have both played with Dirk-Peter Kölsch independently of each other. Brinkmann recounts that, “at the time the connection had been super, so we decided to work as a trio.” It’s not surprising – Kölsch is also someone who breaks with conventions. He calls himself a percussionist rather than a drummer since alongside the usual drum set he employs all sorts of other noise makers, from children’s toys to everyday objects, harmonicas, and electronics. Because of this he is not only a welcome guest at festivals throughout the world, he is just as much in demand by classical orchestras, big bands, film, radio, theatre, readings, and, naturally, by numerous combos.

About a year ago their first co-operative work immediately bore fruit. With their first live recording of Ha! the three won the 2007 competition “jazzwerkruhr”. No less a figure than the French-Vietnamese star guitarist and ACT artist Nguyên Lê was impressed – Lê personally recommended this unusually fresh trio to ACT chief Siggi Loch. And so now the unusual pieces of the Jörg Brinkmann Trio, which explicitly combine the unconventionally modern with a taste of nostalgia, can be heard as part of the ACT Young German Jazz series. Sometimes, as in “Hühner–Walzer” (Chicken Waltz), it sounds a little like the miniatures of a Yann Tiersen. Sometimes there is a sense of shady lounge music; here a scratching cello and prepared piano sound something like the sound track to a crime thriller, as in “Mister Nice”. “September” is a wild, arpeggio-filled, singing ballad, whereas in “Rapunzel” a hard bop line suddenly breaks out. On “Live in Hamburg” a little melody leaps up on top of an authoritative ska rhythm, and with its old-school-rhodes-sound, “Klassentreff” (Class Meeting) classic jazz-rock comes back with a vengeance.

The whole thing has a special note about it through an instrumentation that up until now has not existed in jazz – a glockenspiel is included alongside cello, piano, and Fender Rhodes, and naturally, Kölsch’s edgy, outrageous equipment: “He continually comes in with something new that opens up a new direction,” Brinkmann comments. “For example, we named the 'Hühner-Waltzer' (Chicken Waltz) after his daughter’s toy “screeching” chicken. The same sorts of noises also introduce 'Rapunzel'. "

An intermezzo accompanies most of the pieces, and curiously, the “introduction” and “song” come right at the end. So is this a concept album? “Yes, in certain ways,” says Brinkmann. “All the pieces are relatively short, none of the solos get out of hand, and they’re laid out with a lot of variety. That raises the question as to how you can tie and hold all the diverse strands together. That’s how we came to the idea of the five intermezzi, which should have the effect of a sip of water at a wine tasting – it cleans the taste buds for the enjoyment of the next piece and the next sound sensation.” And to that you can only say Ha! Enjoy!
Top
Post Reply
1 post • Page 1 of 1