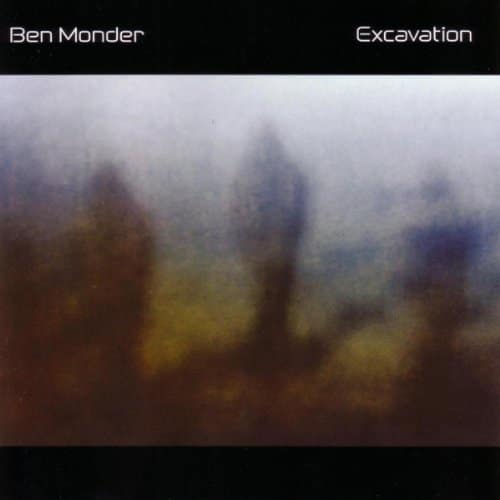 Ben Monder has been referred to as a young "unsung hero" or a "new young lion" of jazz guitar, terms which no longer suit him. Not many unsung heroes have a discography as long as your arm , with three records released under their own name (on another, he was co-billed as a leader with vocalist Theo Bleckmann) in the last 5 years. And at 38, especially in this field of endeavor, Ben cannot longer be considered a youngster (although I must admit, his physical appearance belies his years). Better to label him, quite simply, one of the finest players of his generation, with a career, thanks to the visionaries at Arabesque as well as some of the fine, smaller labels that are responsible for other notable releases featuring him, now becoming increasingly and fittingly well-documented.

Ben's also got a great knack for single- word titles for his projects, with his three solo records, in order, being entitled "Flux," "Dust" and "Excavation." The most current is especially fitting, as Ben and crew literally unearth layer upon layer of harmonic invention from the tunes and progressions. Another component of the term is that it involves heavy lifting in which these players, musically speaking, readily engage, because they are not content with conventional jazz harmony or conventional ways of stretching it. The listener must therefore prepare the ears for some heavy, but certainly not burdensome, lifting as well.

Ben is a chordal and textural master, mining the advanced harmonic concepts heard in the chordal work of Bill Frisell, Mick Goodrick, Steve Khan, and Wayne Krantz, as well as lesser-known but no less masterful Bostonians Bret Wilmott and Randy Roos. He's obviously studied and absorbed the quartal harmonic concept of McCoy Tyner, upper structure triads, and all manner of harmonic extensions, substitution and drop voicings. A hobbyist guitarist sitting in the audience would be hard-pressed to find any of Monder's voicings in a standard chord almanac. Suffice to say that Ben is easily capable, when employing minimal effects, to turn four notes over a bass note into a pure wall of sound. In Ben's hands, a simple melody voiced on the top note (as he does on the closer "You Are My Sunshine") can be entertainingly turned on a dime from dulcet to eerily, yet beautifully dissonant, depending on what he instantaneoulsy chooses to voice underneath it. In the course of a tune, four chords in a four bar progression will be replaced by sixteen, creating a harmonic primer only to be stripped bare by tune's end. All that being said, his single note soloing concepts and execution are as equally formidable as his Einsteinian chordal work.

Compositionally, Ben is equally adept, constructing many tunes that include several movements and incorporating healthy dose of 12 -tone concept. Melodies incorporate non-traditional, close intervals, while retaining intriguing listenability. The thing is, Ben always seems to be able to pump some measure of hydrogen into these songs. Even the darkest of them has an airy vaporousity, that in the end, uplifts. It is the compositional facet of his musical persona , when added to the rest of the puzzle, that most readily separates him from the guitarists mentioned above.

"Mistral" starts with a 9 minute solo piece, featuring deftly harp-like fingered arpeggios wafting one upon the otherwith bass notes played on detuned lower strings slapping up against the fretboard. The tone here, while definitely more acoustic than electric, is hard to pinpoint, sounding most like it was achieved on a miked hollow body electric guitar. "Luteous Pangolin" features the more familiar Monderisms, a plaintively intricate chord progression with a blue melody voiced by Bleckmann, himself a unique virtuoso on his chosen instrument, voice. Multifold intricacies unfurl, with Bleckmann singing pitches against the underlying chords that lie not on top of the chord voicing, as is conventionally done, but contained in its middle. As the melody becomes folkier sounding, a spare but beautiful beginning to the single note solo enters, remaining sweet as it gets more crowded. In this tune's case, the solo is more consonant than the melody, which returns to take the tune out.

"Ellenville" is the next, more expansively intricate composition, weighing in at a hefty 15 minutes. This one begins with Bleckmann singing a decidedly happier vocal line which gets into extremely high register, still managing to fit in some trademark dissonance. At the two minute mark, the melody, no less triumphant, becomes more challenging and slows to a murmur before setting up a chord progression sounding out the song's head, with an added- excavated if you will- dissonant layer. As the progression builds movement Ben steps in for his masterful single note turn, followed by Skuli Sverrison's longest feature on the recording. Employing a woody, unaffected tone, Skuli is allowed ample opportunity to show why he is one of a handful of bassists able to stand toe-to-toe with the leader of this date as a soloist. Sverrisson's inclusion in the cast is refreshing change from Ben's usual choice of acoustic bass accompaniment. Best known as a member of Laurie Anderson's touring unit or a technical fusionist from his years with Allan Holdsworth, he has moved comfortably into the New York downtown scene, and is equally adept in his role in ethnically influenced ensembles, such as Pachora and Jamshid Shafari's band, or his role in more out ensembles. After the solo section, the tune basically backs out from whence it came, returning first to the progression preceding the solo section, this time featuring snippets of searing unison interplay between Monder and Bleckmann-either they rehearsed this passage for months or they have developed a familial telepathy from their years of collaboration- and then to the more dissonant vocal theme, ending with a quiet take on the head.

"Sunny Manitoba" is a more "conventional" tune, featuring a clear head, solo section and ending. It's wonderfully executed with harmonic intellect and elan, featuring a chord solo worked in for good measure. I would pick this tune as the uninitiated's perfect intro to Ben's "thing".

"Hatchet Face" returns to more complex intricacies, with a unison single note guitar line and vocal giving way to a vocal over a lush chord progression, featuring Black's drums so precisely dropping accents around the vocal line as though they were played by the singer himself. Ben provides tasteful contrast to this tune's gentler head with his unique brand of sonic freakout in its sole appearance on the record, disappointing insofar only as Ben does this sort of thing so well. For the best of Ben at this particular style- let's call it "sonic painting"- I would recommend his unfettered work on Chris Dahlgren's underheard 1996 debut on Koch, called "Slow Commotion."

"Etching" is Bleckmann's vocal technique masterwork, wherein his full range is exploited, singing actual lyrics as well as wordless vocals, with subtle percussive, guttural devices found at the edge of breathlessness used to maximum effect. This one imparts a palpable sonic rendering of the medieval passage of time, a soundtrack to a prisoner sentenced to a draconian banishment, with Monder painting in shades of grays and brown, providing his own fitting accompaniment to the cd's gloomy artwork. "Windowpane" gives us a look into a masterwork of chordal arpeggiation that very few players would be capable of executing and even fewer still of composing. Nary a dissonant tone is heard during this beautifully sensitive solo piece.

All in all, another extremely strong release from an underrecognized, innovative harmonic master and his henchmen that, so fortunately for us all, calls out for the next.