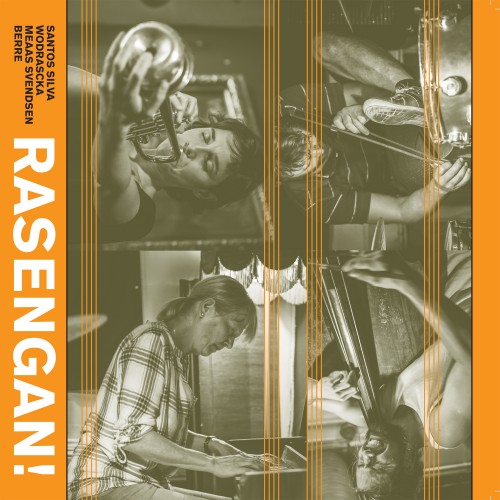 An ad hoc group assembled for opening night of last year’s Blow Out! festival at Oslo’s Café Mir, Rasengan! is a fiery session in the European free jazz mode. A straightforward acoustic quartet of trumpet, piano, bass, and drums, they really lean into the European creative-music lineage of which they’re a part. For one thing, I really dig the FMP-throwback aesthetic of the cover. Can we call that color “Follies orange”?

All four members of the quartet—Susana Santos Silva, Christine Wodrascka, Christian Meaas Svendsen, and Håkon Berre—are well-established in the European jazz scene. Santos Silva has been covered extensively on the blog (though, as I admitted in a comment last fall, I had completely missed out on her music for years). Wodrascka’s solo album Linéaire was featured on the blog. And Meaas Svendsen latest solo bass recording was reviewed earlier this year. Berre is relatively underrepresented here, but as a founder of the Barefoot Records collective, I expect that will change shortly. I’m not sure how these four decided to assemble, but the result is magnificent. They waste absolutely no time. From the outset, all four members are going at full blast. Seriously, Rasengan! is a half-hour of fire.

“Sweatshirt” takes up the bulk of the album, at 25 minutes. Opening with everyone in staccato, the shape of the piece rapidly assembles. Berre keeps up a brisk undercurrent, countered by Meaas Svendsen’s lively bass. Something of a call-and-response motif emerges from Santos Silva and Wodrascka’s early explorations. About four minutes in, “Sweatshirt” is swinging. As soon as it opens up, however, the group pulls back, setting the stage for a ferocious solo from Wodrascka that’s backed by a chaotic soundscape of Meaas Svendsen’s extended arco, Berre’s assorted percussion, and the barely-contained howls of Santos Silva’s trumpet. Each member, in turn, takes a moment at the lead. But in the spirit of collective improvisation, the entire quartet is in constant motion, playing off each other’s ideas and urging on their collaborators.

“Death by Candiru” opens in a somewhat meditative state, with airy work from Santos Silva, punctuated by Wodrascka’s restrained piano. Meaas Svendsen gradually fills in, leading to a thoughtful duet with Wodrascka. When Santos Silva returns on muted trumpet, Berre joins on bowed percussion, his metallic drones heightening the tension in a piece dominated by space. “Death by Candiru” (and the album) ends abruptly, leaving many ideas unfinished, many emotions unfulfilled. But isn’t that what separates a great free session from a merely good one, leaving the door wide open for more?
Lee Rice Epstein
Top
Post Reply
1 post • Page 1 of 1