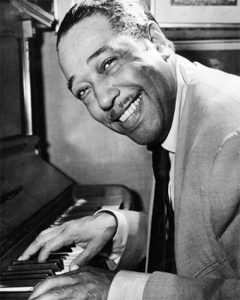 Edward Kennedy “Duke” Ellington was an American composer, pianist, and leader of a jazz orchestra, which he led from 1923 until his death over a career spanning more than six decades.

Born in Washington, D.C., Ellington was based in New York City from the mid-1920s onward and gained a national profile through his orchestra’s appearances at the Cotton Club in Harlem. In the 1930s, his orchestra toured in Europe. Although widely considered a pivotal figure in the history of jazz, Ellington embraced the phrase “beyond category” as a liberating principle and referred to his music as part of the more general category of American Music.

Some of the jazz musicians who were members of Ellington’s orchestra, such as saxophonist Johnny Hodges, are considered among the best players in the idiom. Ellington melded them into the best-known orchestral unit in the history of jazz. Some members stayed with the orchestra for several decades. A master at writing miniatures for the three-minute 78 rpm recording format, Ellington wrote more than one thousand compositions; his extensive body of work is the largest recorded personal jazz legacy, and many of his pieces have become standards. He also recorded songs written by his bandsmen, for example Juan Tizol’s “Caravan”, and “Perdido”, which brought a Spanish tinge to big band jazz. In the early 1940s, Ellington began a nearly thirty-year collaboration with composer-arranger-pianist Billy Strayhorn, whom he called his writing and arranging companion. With Strayhorn, he composed many extended compositions, or suites, as well as additional short pieces. Following an appearance at the Newport Jazz Festival in July 1956, Ellington and his orchestra enjoyed a major revival and embarked on world tours. Ellington recorded for most American record companies of his era, performed in and scored several films, and composed a handful of stage musicals.

Ellington was noted for his inventive use of the orchestra, or big band, and for his eloquence and charisma. His reputation continued to rise after he died, and he was awarded a posthumous Pulitzer Prize Special Award for music in 1999.

Ellington grew up in a secure middle-class family in Washington, D.C. His family encouraged his interests in the fine arts, and he began studying piano at age seven. He became engrossed in studying art during his high-school years, and he was awarded, but did not accept, a scholarship to the Pratt Institute, Brooklyn, New York. Inspired by ragtime performers, he began to perform professionally at age 17.

Ellington first played in New York City in 1923. Later that year he moved there and, in Broadway nightclubs, led a sextet that grew in time into a 10-piece ensemble. The singular blues-based melodies; the harsh, vocalized sounds of his trumpeter, Bubber Miley (who used a plunger [“wa-wa”] mute); and the sonorities of the distinctive trombonist Joe (“Tricky Sam”) Nanton (who played muted “growl” sounds) all influenced Ellington’s early “jungle style,” as seen in such masterpieces as “East St. Louis Toodle-oo” (1926) and “Black and Tan Fantasy” (1927). 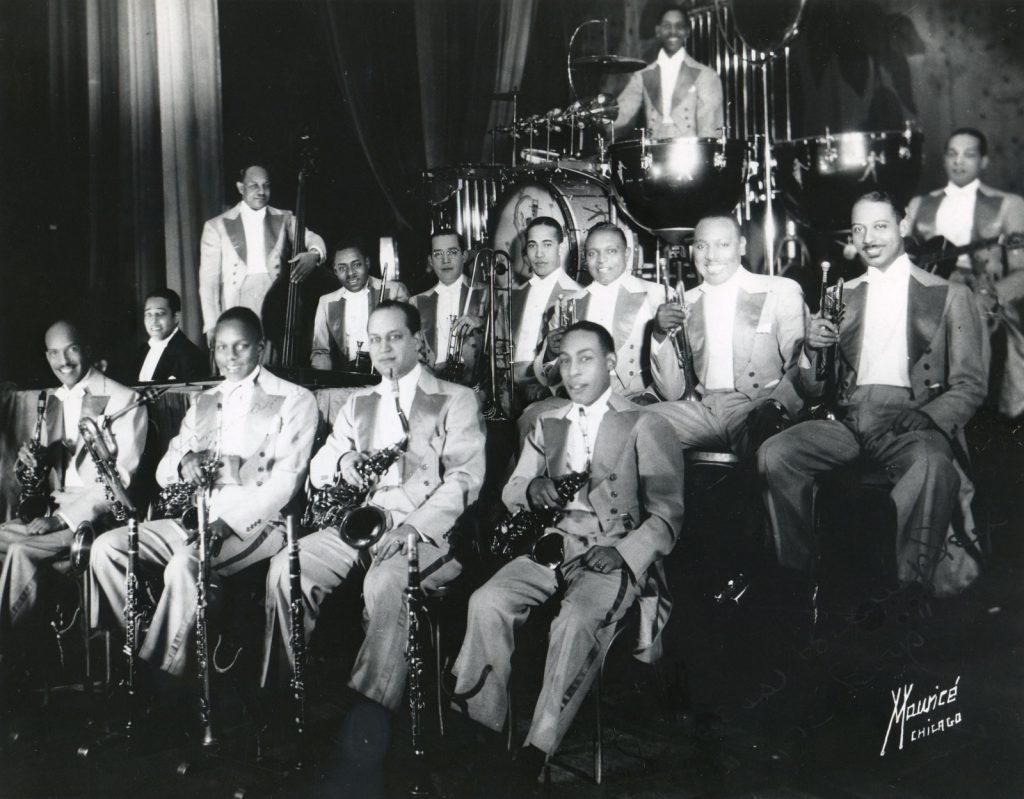 Extended residencies at the Cotton Club in Harlem (1927–32, 1937–38) stimulated Ellington to enlarge his band to 14 musicians and to expand his compositional scope. He selected his musicians for their expressive individuality, and several members of his ensemble—including trumpeter Cootie Williams (who replaced Miley), cornetist Rex Stewart, trombonist Lawrence Brown, baritone saxophonist Harry Carney, alto saxophonist Johnny Hodges, and clarinetist Barney Bigard—were themselves important jazz artists. (The most popular of these was Hodges, who rendered ballads with a full, creamy tone and long portamentos.) With these exceptional musicians, who remained with him throughout the 1930s, Ellington made hundreds of recordings, appeared in films and on radio, and toured Europe in 1933 and 1939.

The expertise of this ensemble allowed Ellington to break away from the conventions of band-section scoring. Instead, he used new harmonies to blend his musicians’ individual sounds and emphasized congruent sections and a supple ensemble that featured Carney’s full bass-clef sound. He illuminated subtle moods with ingenious combinations of instruments; among the most famous examples is “Mood Indigo” in his 1930 setting for muted trumpet, unmuted trombone, and low-register clarinet. In 1931 Ellington began to create extended works, including such pieces as Creole Rhapsody, Reminiscing in Tempo, and Diminuendo in Blue/Crescendo in Blue. He composed a series of works to highlight the special talents of his soloists. Williams, for example, demonstrated his versatility in Ellington’s noted miniature concertos “Echoes of Harlem” and “Concerto for Cootie”. Some of Ellington’s numbers—notably “Caravan” and “Perdido” by trombonist Juan Tizol—were cowritten or entirely composed by sidemen. Few of Ellington’s soloists, despite their importance to jazz history, played as effectively in other contexts; no one else, it seemed, could match the inspiration that Ellington provided with his sensitive, masterful settings.

Masterworks And Popular Songs Of The 1930s And ’40s

A high point in Ellington’s career came in the early 1940s, when he composed several masterworks—including the above-mentioned “Concerto for Cootie,” his fast-tempo showpieces “Cotton Tail” and “Ko-Ko,” and the uniquely structured, compressed panoramas “Main Stem” and “Harlem Air Shaft”—in which successions of soloists are accompanied by diverse ensemble colours. The variety and ingenuity of these works, all conceived for three-minute, 78-rpm records, are extraordinary, as are their unique forms, which range from logically flowing expositions to juxtapositions of line and mood. Tenor saxophonist Ben Webster and bassist Jimmy Blanton, both major jazz artists, were with this classic Ellington band. By then, too, Billy Strayhorn, composer of what would become the band’s theme song, “Take the ‘A’ Train,” had become Ellington’s composing-arranging partner.

Not limiting himself to jazz innovation, Ellington also wrote such great popular songs as “Sophisticated Lady,” “Rocks in My Bed,” and “Satin Doll;” in other songs, such as “Don’t Get Around Much Any More,” “Prelude to a Kiss,” “Solitude,” and “I Let a Song Go out of My Heart,” he made wide interval leaps an Ellington trademark. A number of these hits were introduced by Ivy Anderson, who was the band’s female vocalist in the 1930s.

During these years Ellington became intrigued with the possibilities of composing jazz within classical forms. His musical suite Black, Brown and Beige (1943), a portrayal of African-American history, was the first in a series of suites he composed, usually consisting of pieces linked by subject matter. It was followed by, among others, Liberian Suite (1947); A Drum Is a Woman (1956), created for a television production; Such Sweet Thunder (1957), impressions of William Shakespeare’s scenes and characters; a recomposed, reorchestrated version of Nutcracker Suite (1960; after Peter Tchaikovsky); Far East Suite (1964); and Togo Brava Suite (1971). Ellington’s symphonic A Rhapsody of Negro Life was the basis for the film short Symphony in Black (1935), which also features the voice of Billie Holiday (uncredited). Ellington wrote motion-picture scores for The Asphalt Jungle (1950) and Anatomy of a Murder (1959) and composed for the ballet and theatre—including, at the height of the American civil rights movement, the show My People (1964), a celebration of African American life. In his last decade he composed three pieces of sacred music: In the Beginning God (1965), Second Sacred Concert (1968), and Third Sacred Concert (1973).

Although Ellington’s compositional interests and ambitions changed over the decades, his melodic, harmonic, and rhythmic characteristics were for the most part fixed by the late 1930s, when he was a star of the swing era. The broken, eighth-note melodies and arrhythms of bebop had little impact on him, though on occasion he recorded with musicians who were not band members—not only with other swing-era luminaries such as Louis Armstrong, Ella Fitzgerald, and Coleman Hawkins but also with later bop musicians John Coltrane and Charles Mingus. Ellington’s stylistic qualities were shared by Strayhorn, who increasingly participated in composing and orchestrating music for the Ellington band. During 1939–67 Strayhorn collaborated so closely with Ellington that jazz scholars may never determine how much the gifted deputy influenced or even composed works attributed to Ellington.

The Ellington band toured Europe often after World War II; it also played in Asia (1963–64, 1970), West Africa (1966), South America (1968), and Australia (1970) and frequently toured North America. Despite this grueling schedule, some of Ellington’s musicians stayed with him for decades; Carney, for example, was a band member for 47 years. For the most part, later replacements fit into roles that had been created by their distinguished predecessors; after 1950, for instance, the Webster-influenced Paul Gonsalves filled the band’s solo tenor saxophone role originated by Webster. There were some exceptions to this generalization, such as trumpeter-violinist Ray Nance and high-note trumpet specialist Cat Anderson.

Not least of the band’s musicians was Ellington himself, a pianist whose style originated in ragtime and the stride piano idiom of James P. Johnson and Willie “The Lion” Smith. He adapted his style for orchestral purposes, accompanying with vivid harmonic colours and, especially in later years, offering swinging solos with angular melodies. An elegant man, Ellington maintained a regal manner as he led the band and charmed audiences with his suave humour. His career spanned more than half a century—most of the documented history of jazz. He continued to lead the band until shortly before his death in 1974.

Ellington’s sense of musical drama and of his players’ special talents and his wide range of moods were rare indeed. His gift of melody and his mastery of sonic textures, rhythms, and compositional forms translated his often subtle, often complex perceptions into a body of music unequaled in jazz history. Charles Ives is perhaps his only rival for the title of the greatest American composer. Ellington’s autobiography, Music Is My Mistress, was published in 1973.

During the late 1920s and early 1930s, Ellington and his band recorded for almost every label (BluDisc, Pathé, Perfect, Victor, Brunswick, Columbia Records, Okeh, Vocalion, Cameo, Romeo, Lincoln, Banner, Domino, Jewel, and Hit of the Week). Some labels, such as RCA Victor, Okeh and Brunswick, have collected Ellington’s early recordings into box sets, while material from other labels is scattered. The most comprehensive source for Ellington’s early work are the Classics releases, although that series omits alternate takes, which may be found in other collections.
1926

The early 1940s saw limited output due to the recording ban, but Ellington did make annual visits to Carnegie Hall, listed below. In the January 1943 concert, Ellington introduced his first extended suite, “Black, Brown and Beige.” This era also saw the appearance of the “Liberian Suite” and his highly regarded recordings featuring Jimmy Blanton and Ben Webster, “the best Ellington ” according to critic Bob Blumenthal.

Ellington began the 1950s losing Sonny Greer, Johnny Hodges, and Lawrence Brown (the latter two later rejoined). The second half of the 1950s, however, feature his famous “comeback” appearance at the 1956 Newport Jazz Festival, with Paul Gonsalves running through 27 choruses of “Diminuendo and Crescendo in Blue.”

In the 1960s, Ellington made recordings with a number of other star names, including Count Basie, Frank Sinatra, Louis Armstrong, John Coltrane, Ella Fitzgerald and Coleman Hawkins. He also wrote and recorded a number of suites, such as his religious “Sacred Concerts”, the “Perfume Suite” and the “Latin American Suite.”

Ellington remained active to the end of his life, recording three final major suites in the 1970s, the “New Orleans Suite”, his “Third Sacred Concert”, the “Toga Brava Suite”, and “The Afro–Eurasian Eclipse”, his most explicit venture into what would be called “world music.” His concert at Eastbourne was Ellington’s final recording.